A Sophie's choice for brazilians 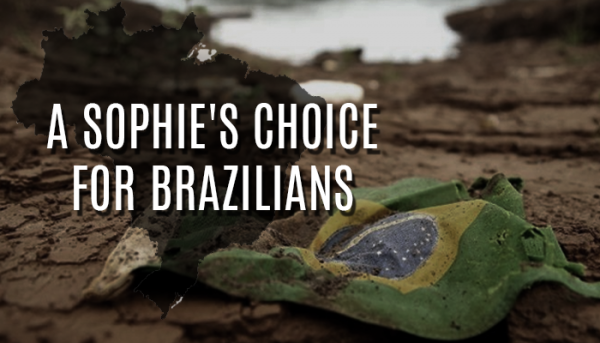 In “Sophie’s Choice”, author William Styron tells the story of Sophie, a Polish mother made prisoner in the Auschwitz concentration camp with her two small sons.  A nazi officer gives her a cruel option: she may choose one of the children to be saved of execution. Or both would be killed.

When signs of economic recovery finally became clear – GDP starting to grow again, foreign investment breaking record in the productive sector and jobs beginning to reappear – favourable perspectives ushered in by the record surplus in the trade balance, inflation and interest rates in decline, confidence in credit recovered  and,  above all, the probable approval of reforms on Labour, Pensions and Taxation legislation, maybe even a Political reform – the future of Brazilian economy was once again blown to the ground by yet another gigantic corruption scandal involving JBS, one of the main “national champions” fuelled by lavish financing from the BNDES during Lula’s administration, with 1829 politicians involved, including President Temer.

A new political crisis is guaranteed. Temer rides the doubts created by selected leaks in the JBS plea-bargaining sessions, along with cuts in the audio tape of his conversation with Joesley Batista, to try and remain in office. However, he does not deny the nature of the conversation in which several crimes were reported to him and he took no action about them, which constitutes a crime. Corruption allegations go far beyond Temer. Aécio, Lula, Dilma, Cabral and one out of every three Brazilian members of Congress received money from JBS. In short, we have a President without moral conditions to govern, and political leaders and congressmen busy about saving their own necks trying to get a safe haven in the future coalition to be formed after Temer possibly steps down from power.

In the current scenario it seems difficult for the reforms to progress and likely for Temer to dish out good deeds, i.e. public funds, to allies who now threaten to abandon his support base. To make things worse, attempts to move forward with reforms may give the false impression that they are attempts to save Temer, increasing rejection to them by part of the population who do not understand – also because the current administration was incapable of explaining to the population the benefits and the need for change – that without said changes the economic crisis, unemployment and poverty will only get worse.

Reforms do not belong to any government. They shall be necessary for whoever is the next President. Without them, the virtuous circle of heightened trust, consumption, investment, credit, jobs and economic growth that was beginning to materialize will once again be replaced by the vicious circle of paralysis, uncertainty and poverty that caused the deepest and longest economic depression in Brazilian history between 2014 and 2016.

The fundamental issue is that if on one hand Temer’s fall seems to be inevitable, and even if it is avoided it will be detrimental to the country, Temer – like Dilma before him – has all the legal means to extend his tenure to the maximum, causing a new economic crisis. The possible paths for Temer’s exit, including impeachment, are not any shorter. A potential criminal action by the Attorney General of the Republic, after the 30 days requested by experts to analyse the tapes JBS submitted in their leniency agreement, will have to be approved by two thirds of the Chamber of Representatives – and will have to be accepted by the STF (Federal Supreme Court). The judgement on the Dilma-Temer original joint candidacy (on the same electoral ticket) is scheduled to be submitted to vote over four sessions of the Superior Electoral Court (TSE)  on June 6. Regardless of the result, however, all parties involved are entitled to appeal the decision.  The remaining path would be Temer’s resignation which, as he stated several times, shall not happen. Why would Temer spontaneously relinquish all the legal protection he enjoys as President, including privileged Court rights ?

This is where our Sophie’s choice comes in. One option is to take the long legal path for Temer to not just lose his post but eventually to be criminally punished, though knowing that this will prolong the period of uncertainty, deepen economic depression, unemployment and social chaos in the country. Included here is the risk that, despite all the cost to the country and to Brazilians, he may not even fall at the end, or he falls without any additional punishment, like it happened to Dilma.

The other option is a vast political agreement, whereby leaders of the various parties and of the Judiciary negotiate an agreement with Temer for him to leave the Presidency quickly, by resigning, on a license or without appealing a possible unfavourable decision by the Superior Electoral Court (TSE) – in exchange for the benefit of not being prosecuted on the charges contained in the JBS case. An indirect election – as defined by the Constitution – makes for a brief political transition under a leader of consensus on good relations with different political groups – such as Henrique Meirelles, who was Lula’s President of the Central Bank  and is now Temer’s Finance Minister, or Nelson Jobim, who was the leader of the PMDB in Congress, Minister of the Supreme Court and Justice Minister under Fernando Henrique Cardoso and Minister of Defense for both Lula and Dilma. Uncertainty would soon be brushed away and if reforms continued to go forward – Political reform included – there would be no worsening of the economic depression, sparing millions upon millions of Brazilians from being punished once again, together with the corrupt bunch, for crimes they did not commit.

There would be no other good option for the country. Only terrible options are left.

To punish Temer like we should we would punish all Brazilians, including the concrete possibility that you or someone close to you would lose your jobs and become unable to keep your families for the next year and a half.

Or, to prevent this from happening, we cut an agreement with Temer and protect the jobs of millions of Brazilians. In this case, even if all other 1.828 politicians involved in the JBS case are indicted, we still weaken the best thing that emerged in Brazil of late – combat against corruption and impunity – heightening the bitter taste left behind by the excessively generous leniency agreement with the Batista brothers.

What would be your choice?