One foot on the brake, the other on the accelerator…

The unemployment rate dropped to 3,5% in the US in September, the lowest ever in the last 50 years. Excellent news, right? Yes…and no. Considering the current state of the economy, of course it is good news, but…

Europe is perhaps approaching a recession. Industrial production in China was the lowest in August since 2002. Of the three main engines of world economy only the American, the strongest of the three, remains strong.

This is why the lowest unemployment rate since 1969 becomes bad news. Every time the American unemployment rate drops to very low levels, the economy goes into recession soon after and unemployment quickly rises. This does not happen only in the US, but everywhere in the world. The economy is cyclic, just like the seasons of the year. 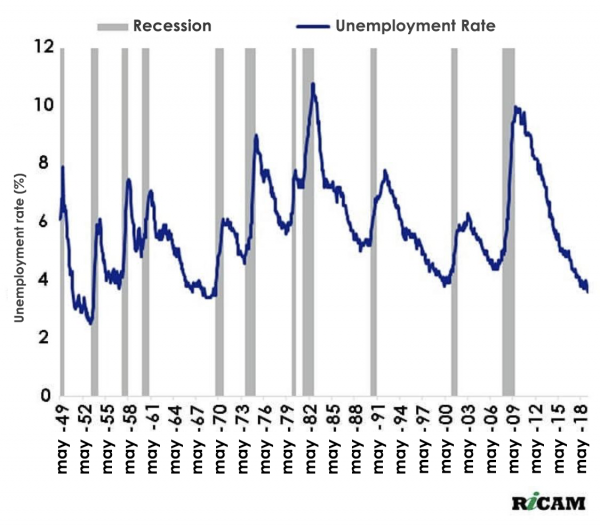 No-one knows exactly for how long or how much longer unemployment can still go down before a recession comes. With the fastest process of innovation and automation in History taking place now, this cycle of economic expansion may be the longest in the last 70 years. Due to it, even with very low unemployment, salaries and inflation did not increase, permitting interest rates not to go up much, thus avoiding a strong contraction in credit which often causes the end of economic growth. So, unemployment may drop more this time and, probably, drop even a little further. Still, if History teaches something, we are closer to the end than to the beginning of this round of economic expansion.

This concern is compounded by the probable flare up of the American Trade War with China and Mexico. Playing rough with the Chinese may help Trump in the American election race. On the other hand, he knows that the Trade War applies a brake on the American economy but he bets that the brakes will be compensated by a monetary acceleration – the American Central Bank cutting the interest rates – and taxes. The American Government deficit went over US$ 1 trillion this year. It will grow even further next year.

Trump’s strategy may work. If the next American recession comes after the November 2020 election, Trump’s chances of re-election shall be considerable.

However, anyone who ever tried to drive a car with one foot on the break and the other on the accelerator knows about the risk of losing control. And if the American economy skids, the whole world will feel the crash.