What about now, Brazil? 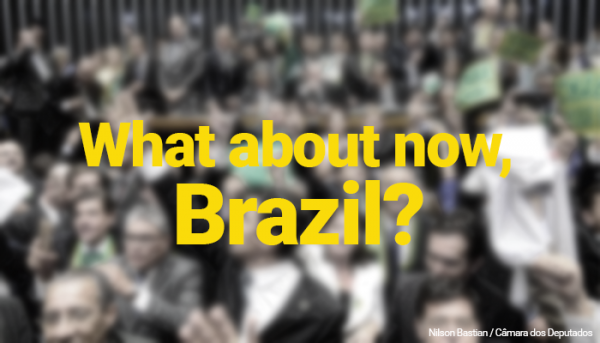 I’ve spent the past months stating that if Dilma Rousseff’s government was not able to balance the public finances and regain the trust of investors, businessmen and consumers – as, unfortunately it wasn’t –, it would be difficult for the President to finish her term. Last Sunday, Brazilian Congress decided to carry on with the impeachment process and placed a political transition in a very close (and inevitable) horizon.

By mid-May, Senate should approve by simple majority – 41 of 81 Senators – the commencement of proceedings against the President. Then, the Senate will have until November to judge the process. By then, the approval will need the vote of at least 54 of 81 Senators. But the main thing is that the commencement of the process is almost certain. It would take Dilma Rousseff away from Presidency for 180 days, anticipating the transition of power to the current Vice President, Michel Temer. That’s the reason why Temer is already discussing the composition of his team.

It is also important to remind that on October, 2nd and 30th, we will have the first and second rounds of municipal elections and part of the pro-government senators might want to anticipate all the impeachment process, in order to avoid having to use the municipal elections to advocate the maintenance of a extremely unpopular President.

So it is that some Senators of the Worker’s Party, with the support of some Ministers that composes the current Government, want to send to the Senate a Constitutional Amendment Bill (PEC, in portuguese) to anticipate the end of the current federal mandate to the end of 2016, stretching the term of the next president from four to six years and anticipating the upcoming presidential elections for the same dates of municipal elections.

If it had been made last year – or before the beginning of the impeachment process –, this solution could ease down the political and economical crisis. The perspective of having a President with a longer term and, therefore, more powerful, could’ve created more favorable conditions for the advancement of fundamental structural reforms to Brazil’s development, such as the reforms of pension, labor, tax and politics.

At this point, it seems like a desperate attempt to avoid a probable defeat at the Senate – or a coup, to use the Workers Party jargon. Besides, as the own authors of the Amendment admit, even if it is approved by the Congress, to avoid the creation of “legal limbo”, the current mandate shortening proposal would have to have the endorsement of President Rousseff and Vice President Temer. Maybe Dilma would agree with it – which is not a certain, because of her fierceness, but it’s possible due the lack of support that she has. However, it’s safe to say that Temer won’t be ok with the idea.

There are still legal actions in the Superior Electoral Court (TSE) alleging that corruption money was used to finance the election campaign of Dilma and Temer – a fact already confirmed by some of the sponsors of the campaign – which will be judged in May. If one of them is approved, there would be the cancellation of both Dilma and Temer mandates and probably new elections would be called. These actions were filed by the PSDB party, which allied to Temer to proceed with the impeachment and has published a letter of intent to support and possibly even participate in Temer government composition. However, it is still unclear what will be the party’s attitude towards those actions if Temer assume the Presidency, particularly given that the top three names of the party (Aécio Neves, José Serra and Geraldo Alckmin) have divergent thoughts about the degree of success of the Temer Government.

Summing it up: the political uncertainties remain huge. If Temer wants to not only take the presidency, but be able to pull the country out of the hole, he must take the difficult task of sewing a sufficiently broad and cohesive support base to achieve progress in Congress structural reforms. Besides them, public spending cuts and administrative measures to improve the business environment and the efficiency of the Brazilian economy must be part of a confidence recovery package.

Temer’s skills to come up with these alliances – which is likely to include an agreement in which he undertakes to a transitional role, not participating in the 2018 elections – will be his first major test. Overcoming it, Temer not only increases his chances of actually becoming president, but to be successful over the government. Otherwise, the possibility of early elections – according to the judgment of the TSE or the PEC – will get stronger.

The challenges for Temer and the country are not few, but as happened in Argentina after the departure of Cristina Kirchner and the inauguration of Mauricio Macri in the Presidency, Temer should have the support of a business class that has long lost confidence in Dilma and is keen to see the economy, the results of their companies and the values ​​of their businesses to be recovered. Moreover, in a world where the developed countries live, in the words of former US Treasury Secretary Larry Summers, a “secular stagnation” and most emerging countries have too many small markets to individually make significant differences in the results of large global companies, Brazil and a few other emerging countries with large markets and good long-term growth potential are in a prime position to attract foreign investment. With the undervalued currency and low current value of Brazilian companies, that puts the country in settlement of the point of view of foreign investors, the framework for an avalanche of productive investment once confidence gets restored is completed.

To complete, in the past few months, some signs – still incipient, true – appeared, suggesting that perhaps the dollar has reversed its valuation cycle of recent years, which has contributed to a rise in prices of international commodities (grains, metals, energy sources). This increase benefits the Brazilian economy and, along with the political transition perspective, it led to a recent appreciation of the Real of almost 20%, which incidentally was not higher because the Central Bank sold more than $ 30 billion in foreign exchange derivatives from last week. The appreciation of the Real and the intensity of the recession has made inflation in Brazil to the first drop recently. This trend should not change if Real continue to strengthen, which could lead to interest rate to start falling between the end of this year and next year, allowing credit recovery and expansion of investment, consumption and generation jobs. Whereas the SELIC base interest today is 14.25% per year in Brazil and the equivalent world average rate is now only 0.2% per year, the potential for attracting foreign capital, lower interest rate and economic stimulus in Brazil, when there is the resumption of confidence, is brutal.

In summary, the challenges are many, but as I have been advocating, the probability of a cyclical economic recovery for some years that surprises by its force once confidence is rebuild is much greater than the pessimists fear.

On the other hand, the support of this initial recovery and acceleration of Brazil’s growth potential will require structural reforms, improvement of our infrastructure and business environment, better qualified workers and mechanization of the Brazilian economy, among other advances.

Moreover, recent advances, particularly in the battle against corruption, can not be lost. The impeachment of the President for the crime of responsibility in terms of “tax pedaling” (delaying bank transfers to misrepresent balances) must be only the biggest step so far of a change of mentality in the country. The arrest of prominent businessmen involved in corruption was another key step. It is important that politicians involved in corruption, including several heavyweights of the Executive and Legislative branches, regardless of the party they belong to, have the same purpose.

To sum it up, it is up to us, Brazilians, to ensure that the great potential of institutional improvements, economic recovery and the construction of a better and fairer country materialize. Without our pressure, our chances are greatly reduced. Recently, we learned to charge the political class and to question how our own actions collaborate to create the problems we criticize. We can not lose these habits. Incidentally, we must bring them also into our homes and companies.