A country without government 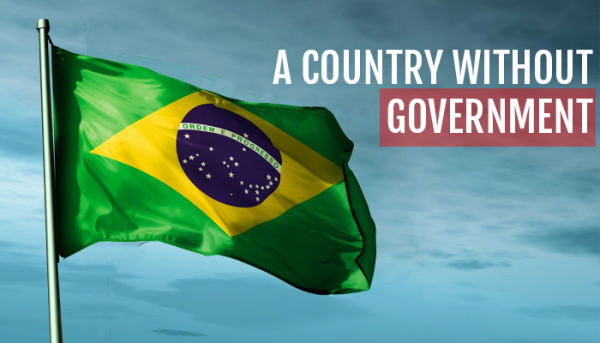 No, I do not refer to the current situation of Brazil, where corruption of unthinkable scale involves the very President Temer , wiped out governability and paralysed Congress and the whole country. In fact, exactly like it happened before to his predecessor Dilma Rousseff.

I refer to something even more important for the fight against corruption to be successful and for a country to be wealthier and more just: a drastic change in mentality in the relations of the Brazilian society with the State.

Imagine that Brazil had no government. Without a government there would not be overpriced contracts for public works. Marcelo Odebrecht and other builders would have no means and no reason to bribe politicians and public officers, and would not be extorted by them.

If there was no government, there would be no state-owned banks like the BNDES. Without the BNDES, Joesley Batista would have to look for other sources to finance JBS, and there would be no reason for him to give more than R$ 1 billion to 1,829 politicians, including President Temer and former Presidents Lula and Dilma.

With no government, Petrobrás would not be state-owned. Its business decisions would not be motivated by politics, but rather by the search of results for the company and its shareholders. Tens of billions of reais diverted to corruption would not have gone down the drain.

If there was no government, politicians could not buy the support of some sectors of society with benefit programs for specific groups such as Bolsa-Família, tax exemptions, subsidized credit lines and other such schemes, giving back to some a fraction of the money taken from all of us via taxes.

OK, you must be wondering, but how about ensuring security, basic education and quality health for all, besides fighting poverty – with no government? Well, this is precisely the point.

In order not to corrupt and be corrupted, in order not to suffocate production and jobs in Brazil with outrageous taxes, and in order to have money and drive to provide good public services, the government should focus on just that – and withdraw from all the rest.

The essence of Brazilian corruption lies in the promiscuity between the State and private initiative. The bigger the State, the bigger the promiscuity. A humongous State which dishes out “favours” is a constant source of corruption. The less the State is directly involved in the economy – and just regulates it – the less corruption and the more wealth there will be. So as to attain maximum efficiency in promoting development whilst being immune to corruption, the State must be minimal in size.