Bananaland, the Court and the Bureaucrats 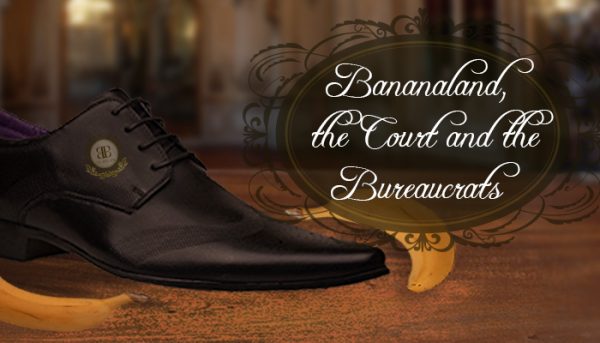 Once upon a time… there was a kingdom called Bananaland. Its government always spent more than it collected in taxes. The court and corruption used up all the funds. Local bureaucrats, however, were very creative. They always found a subterfuge, a little knack to stay afloat.

Bananaland was known for its footwear. Its shoe shops were envied by neighbour kingdoms. One among them really stood out: Shoepershoe. Its three shoemakers were the best in the world.

One day, at the height of corruption and lavish spending with the court, the government became truly penniless. The King then resorted to the bureaucrats and they soon found a solution: a yellow stamp would be required on all shoes produced in the Kingdom. Any pair of shoes found without the Bananaland stamp would condemn the shoemaker to a heavy fine. Brilliant!

The King then hired several inspectors, which increased the Kingdom expenses, but who cared? Magicians assured the King that tax collection would increase.

Shoemakers organized themselves. In Shoepershoe the three shoemakers decided that from then on one of them would make the shoe, the other would stamp it and the third shoemaker would inspect the stamps. They used to make 300 shoes a month before the stamps. With just one shoemaker making shoes, monthly production dropped to 100 shoes. To make up for that, they raised the price of shoes.

Most shoe shops did the same. Production in Bananaland dropped to little over one third of what it was before. A shortage of shoes ensued. The Kingdom which used to export now had to import worse and more expensive shoes. Due to the high prices, lots of people could no longer buy them. “That is alright,” said the Queen, “if the people have no shoes, let them wear sandals”.

Most shoemakers now made and sold less shoes. They became poorer. Their children did not want to follow in their footsteps. The dream was now to become Stamp Inspector and be a friend of the King.

Contrary to plan, tax collection grew very little. Very little was left after paying the inspectors wages. Not everyone followed the rule, but shoemakers who didn’t did not pay fines – they became richer and richer. Only the Stamp Inspectors and the court itself were richer than them.

A baffling mystery, though, were the mansions and bunkers of the Inspectors. How could they afford to buy them? What were they for? There were rumours – blasphemy by the press, no doubt – that mansions and bunkers were for safekeeping boxes and suitcases containing money.

Under pressure for the lack of revenue and from the court, the King called the bureaucrats again. They did not disappoint him: from that point on, besides the yellow stamp all shoes in Bananaland would also need a red stamp. New Inspectors were hired, most of them belonging the King’s family, the court families, the Inspectors families…