China: A Deal too good to be True

By Ricardo Amorim and EIC 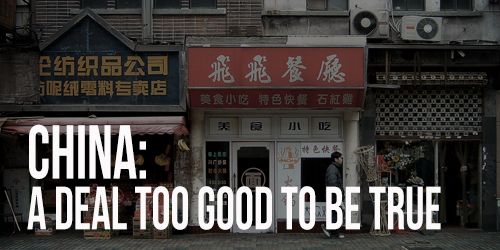 Changes occur in various ways. It is essential to adapt to them. This is also true in the Economy. When analyzing World Bank data for this millennium, emerging countries have grown and contributed towards global growth almost three times more than rich countries. Shocking, is it not? This has never happened before at any point in History. And why is this? Easy now! All this is explained below. 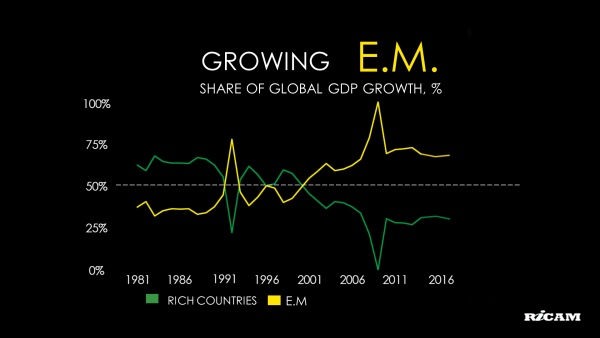 Maybe you will not remember simply because this started about 15 years ago. At the time, Brazil was far from being known for its surfing, George W. Bush was President of the United States and the novelty causing buzz in the market was neither the iPhone nor the iPad, but rather the iPod, launched just two months before. However, the ingress of China in the World Trade Organization, in December 2001, changed the global economic order and did so in favor of emerging markets. The world was turned upside down and Brazil and all other emerging nations started to soar in the winds that started to blow from the East.

Below we point out the consequences of China joining the WTO and the general impact this has created:

So, what is there plenty of in China? This is not a difficult question and helps us understand this scenario. Yes, that’s right, many Chinese! For economists such as myself, this means many hands to work and many mouths to feed. The Chinese are many, they are poor and the exodus of hundreds of millions of them from the countryside to cities in the last 10 years has increased the demand for food and raw materials, such as iron, steel and cement. Brazil is one of the greatest global exporters of all these products.

Increase in demand for Raw Materials

Raw material exporting nations and continents such as Brazil, Latin America and Africa started to sell at higher prices their manufactured and exported goods. The Brazilian agribusiness, for example, which had a trade surplus in the range of ten billion dollars in the previous two decades, reached, driven by the entry of China into the WTO, a trade surplus of ninety-three billion dollars!

The world is flooded with manufactured products

The stage of the Chinese urbanization process, with 50% of the population still living in rural areas, is the same as Brazil’s in the beginning of the 1950’s. The 400 million Chinese who left the countryside in favor of urban areas during the last decade, leaving behind subsistence agriculture and thereby expanding production of the Chinese industry, have added a colossal amount of manufactured goods to global trade at very low prices due to the low cost of Chinese labor. This has favored countries that import these products more than they export and currently pay much less for them, which once again is the case for Brazil, Latin America and Africa.

The world is awash with cheap money

And why so? As already discussed, the Chinese have flooded the world with inexpensive products. With this, global inflation has dropped which in turn has pushed prime rates down throughout the world. And, to top it all off, the global financial crisis coupled with the economic struggles of rich countries since then has led to a further reduction in prime rates to the point that the average prime rates in developed countries are currently at just 0.1% p.a. Several of these countries have negative interest rates. Yes, that is right! Currently in Switzerland, Denmark, Sweden, Germany, Finland, France, Belgium, The Netherlands, Austria and Japan those who borrow money are paid, in an attempt to offer incentives to companies that invest and people who consume to boost the economy.

This movement was very positive for countries that needed to attract foreign capital to finance consumption and investments. In other words, who are we talking about? Emerging countries. And there is Brazil once again!

The consequence is straightforward: more credit, consumption and growth in emerging countries. It is not by chance that Brazil grew more between 2004 and 2010 than during any other period after its redemocratization in the late 80’s. 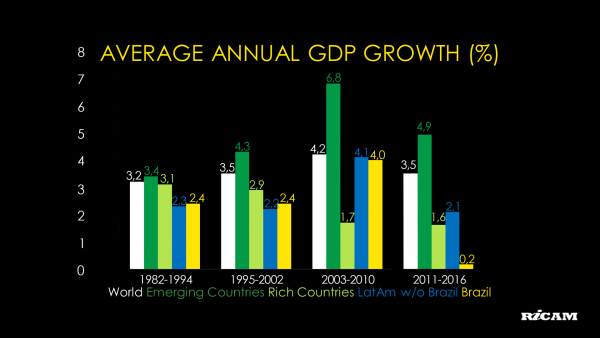 Despite all the current bustle on the Chinese crisis, the country continues to be the second economy to grow the most in the world, second only to India – which, by the way, by the end of this decade or beginning of the next, will cause a new wave of impacts on the global economy, similar to that caused by China since 2001 and which should last around two decades.

Nevertheless, due to the recent downturn of the Chinese economy, growth in emerging countries and around the world slowed down a bit, but continued to be fastest than in any other period in History for the planet, except for the period between 2002 and 2010. However in Brazil, due to reasons of its own, things have changed significantly and not for the best (and we aren’t even talking about the 7×1 debacle against Germany during the 2014 World Cup!). For Brazil to take advantage of the factors that have leveraged our growth until 2010 and continue to propel the economies of most other emerging countries and resume growth as in the previous decade, all it has to do is its own housekeeping, by adjusting public spending, controlling inflation and taking measures that stimulate competitiveness and productivity within the country, but this is the subject of another post.