Is it now the turn of inland industries? 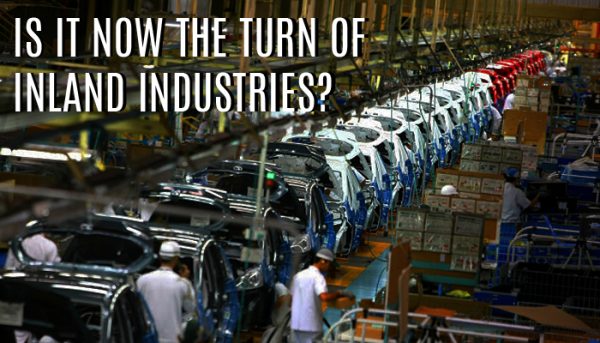 Since 2002, cities in the interior of Brazil have consistently grown more and created more jobs than State capitals. In December 2001, China joined the World Trade Organization. Since then, fueled by the growth in the Chinese demand for food products, agribusiness has been one of of the main drivers of Brazilian economy and towns in the countryside have surpassed Capitals in economic growth. The Chinese are many, they were very poor, and with the growth of the country many of them started to have more money and to eat more and better.

In the meantime, the Chinese industrial market gains had an extremely negative impact on the Brazilian industry. The Chinese flooded the world with cheap products and on top of that Brazil did nothing to reduce the cost and encourage production in the country. Only consumption was stimulated in the last 15 years. The result? The Brazilian industry shrunk and dismissed lots of workers.

In the beginning of this year one of the tendencies changed, the other didn’t. Jobs continued to be generated in the interior of the country. Of the 20 cities that created most jobs in the first 5 years of 2017, 19 are in the countryside. The only exception was Goiânia, which despite being the capital of the State of Goiás is positively affected by agribusiness. Of the 27 State capitals, only 3 opened more formal jobs than closed in the first 5 months, due, among other reasons, to the harsh difficulties faced by the public sector, on which the economies of several State capitals depend a lot.

The news is now that job generation was led by the industry. Of the 20 cities that grew most, in 5 of them agribusiness was responsible for most admissions. It was the case in Vacaria (RS), in Cristalina (GO), Patrocínio (MG), and Mogi Guaçy and Bebedouro (SP). But in 11 of them, including Santa Cruz do Sul and Venância Aires (RS), Nova Serrana (MG), Juazeiro (BA), Goianésia (GO) and Pontal, Vista Alegre do Alto and Birigui (SP), industries were the sector hiring the most.

In some cities of the interior which were leaders in creating new jobs, it was the industrial subsectors that recently had most difficulties that created most jobs. In Joinville (SC), it was the automotive parts industry that created more jobs. In Franca (SP), the city that created the largest number of jobs in the whole of Brazil, hirings came mostly from the footwear industry, which was decimated by Chinese competition until recently.

What made industrialists confident to make these investments? The expectation that production in Brazil would become cheaper and more competitive in the coming years. Great incentive to cost reduction was expected, consequently benefitting production and more jobs.

First, the Labour Reform. There are doubts today that it shall be approved. Even if it is, major concessions became probable for its approval. As a result, its impact on cost reduction – especially legal costs – shall be minor, along with its capacity to stimulate the creation of more jobs.

Second, a Tax Reform was expected which would reduce both bureaucratic costs, by simplifying our ultra-complex tax system, and the tax load itself. Less taxes and less cost with accountants and lawyers would make domestic products cheaper, making them more competitive and therefore stimulating more investment and jobs. Unfortunately, today, without the perspective of approval of the Social Security Reform – which would reduce public expenditure and allow for a reduction in taxes – the possibility of a Tax Reform to reduce the tax load in the country seems remote. It is more likely that taxes shall increase, rather than decline.

A new cycle of growth and job generation was budding. After 13 consecutive years in which retail sales performed better than the industrial production, all signs indicated that the industry would be one of the leaders in this cycle of growth. The matter is now whether the worsening of the political crisis, after the plea bargain by the JBS, will or not abort or at least postpone this new cycle.