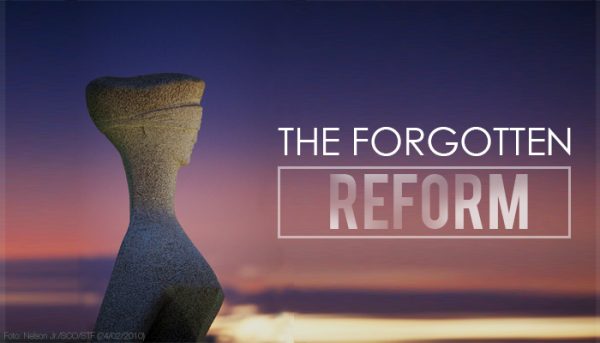 Brazil is being reformed. No shortage of reasons. The biggest moral, political and economic crisis in history could not go unanswered. The quality of responses varies greatly. The Labour, Social Security and Tax reforms, the Cap on Public Expenditure and the privatization and concessions program fall short of what was desired but they still strengthen the generation of jobs and wealth and the country’s potential for growth. On the other hand, the 10 Measures Against Corruption and the Political Reform were disfigured by congressmen. For fear of losing the protection of the “privileged court” benefit extended to members of Congress, politicians strive to intimidate whoever investigates and judges them, at the same time as they try to increase their chances of reelection by changing the electoral rules.

Another fundamental reform that wasn’t even discussed so far is the Reform of the Judiciary Power.

The major demand from the population today is the combat against corruption. The current organization of the Judiciary has not been capable of responding to that. By and large, lower courts have played their role to investigate and try to punish the corrupt, but higher courts frequently prevent that from happening – out of lethargy or political interference.

It is urgent to make Justice more agile and free it from political pressure. There is not another country in the world that I know of where Justice has four instances, like here. Endless procrastinating appeals benefit the guilty, paralysing our Justice with the accumulation of cases. This must change.

Even more important is to guarantee the independence among powers, which is weakened by the fact that the Attorney General of the Republic, the Supreme Court Justices and the ministers in the Municipal, State and Federal Courts of Accounts are all appointed by leaders of the Executive Power. They should all be chosen by their own peers, to ensure effective independence to the Judiciary Power.  Besides, the right to “privileged court” must be seriously limited, perhaps even extinct, to prevent the Supreme Court being overloaded with cases and to guarantee that impunity comes to an end.

Besides, the Judiciary has abusive prerogatives. No-one can judge cases that affect them directly. Unfortunately this happens when Justices decide, for instance, that the ceiling for remunerating  public servants does not include remuneration paid in cash but not named “salary”. Justices inflate their own earnings and that of their peers. In Minas Gerais, for instance, 98% of judges are paid above the legal cap. How can a common citizen trust Justice if those who should zeal for its enforcement are the first to abuse it in their own benefit? We must create objective mechanisms preventing judges from judging causes that affect them directly, or when they are not impartial. Due to esprit-de-corps, this is not what happens now. None of the 80 requests for impeachment or suspicion filed with the Supreme Court was even addressed by the full Court. They were all rejected by the various presidents of the Supreme Court. In several such cases, the relations between the judge and the defendants made the lack of impartiality flagrant.