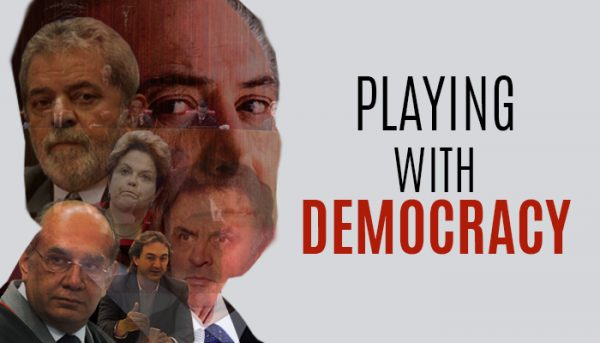 When it works, democracy is precious. Participation of the people in the destinies of the country by means of their representatives adds legitimacy to decisions and ensures that the interests of all be considered and that the social fabric does not tear. Arbitrariness and persecutions are far more common in authoritarian regimes, even when rulers are well meaning.

Democracy is precious, but it is fragile. Brazilian history itself makes it quite clear. From 1930 to our days, we Brazilians lived one year out of every three under the yoke of dictatorships. Adding the Getulio Vargas dictatorship to the more recent military dictatorship, we had over three and a half decades without democracy. Each of the dictatorships lasted more than a decade. This is the rule in international experience. The utopian idea that “coups”, military or not, that overthrow corrupt democratic leaderships will quickly call elections , unfortunately finds no bearing in history. Once in power, the new ruler finds ways, excuses and reasons to perpetuate himself and becomes a dictator.

This is where danger lies. Two essential pillars for just any democratic regime are people feeling represented by their leaders and the segregation of  powers to guarantee that no leader abuses his attributions.

None of these pillars is present in Brazil today. The feeling of not being represented by its government officers started to emerge in half the populations about a decade ago, when the then president Lula started to promote a schism  to defend himself of the corruption scandals known as Mensalão. According to him, there was no corruption but a campaign of the elites and the middle class against the achievements of the poor. Political polarization split the country and created the perception that whoever was in power would govern for one of the groups only. From then on, both during Dilma’s and Temer’s respective administrations, some groups started to oppose the measures that attempted to put the Brazilian economy back on track, believing that whatever the politicians in office did would necessarily be against them, without bothering to even analyse the content of such measures.

To make things worse, as the Car Wash Operation (Lava-Jato) progresses, the quantity, severity and extent of the corruption scandals continue to increase. Independently of political parties, presidents, governors, mayors and legislators in their near totality do not represent their constituents, they merely abuse their positions in quest of personal benefits.

It became clear that the separation of powers does not exist in practice. All we have is the “esprit-de-corps” of a kleptocracy looting the Brazilian State and population.  STF and TSE (Supreme Court and Electoral Court) Ministers “judge” people who appointed them to their posts and congressmen refuse to revoke the mandates of other congressmen proven to be involved in corruption. The president of the TSE, Minister Gilmar Mendes, goes to the extreme of defending that the Court is not competent to judge politicians who committed electoral crimes. What is the TSE for, then, consuming R$ 2 billion/year of public funds?

We urgently need to stop inflaming political polarization, punish all the corrupt and restore the segregation of powers, and to adopt laws to forbid political appointments to the STF, the TSE, the TCU and other control entities to guarantee the independence they need to perform their duties.

In case they do not attend to that, our leaders shall be placing themselves and democracy itself at risk – as is made clear by the recent attempt on a republican legislator by a democrat extremist in the US and the growing support to the idea of a military coup in Brazil. Go back, Satan!